The other day I finished reading The Dark, a book that has sat on my bookshelf since I can remember. For some reason I always thought I had read The Dark when I was younger – I started reading James Herbert and Stephen King novels when I was about 10 years old. I remember reading what seemed to be a short story, never really finding it that interesting and therefore never bothered with the book since. It has just sat there since, alongside the others in my collection, many of which were my dads. First published in 1980 (which is the version I have) this book is 5 years older than me. 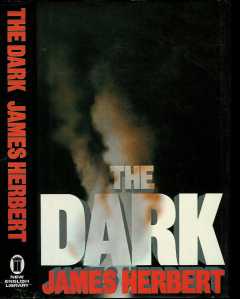 The Dark is a great book. There are many very good James Herbert novels and this is definitely a top one. I just can’t believe I have never actually read it before. I recently read a couple of Stephen Kings (Duma Key and Everything’s Eventual), again after receiving them as presents. Both are good books but The Dark confirms my preference for Herbert  over King. The imagery is much more powerful in Herbert’s work and much more graphic. There are scenes in The Dark, and others like The Fog, which are just disturbing. Reading these books and watching gory horror films since I was young has desensitised me somewhat, so I can appreciate the style and substance without feeling utterly horrified.

There is a scene, quite early on, of mass suicide where all the participants are killing themselves and each other in the most evil ways possible. This scene is described in all its glorious gory detail which even I found shocking. You just don’t get that from Stephen King.

The Dark does have certain similarities to The Fog – another James Herbert, which is one of my all time favourites. The ‘layout’ of the plot is pretty much the same in both books – the main story being interspersed with isolated ‘cases’ of violence/murder/etc – but this isn’t a bad thing really as the system works very well.

Overall, The Dark is a very good book even if it does have very close similarities to others of the time. I am pleased to say that it is one of my favourite books by James Herbert and would recommend anybody to read it. Unless they are easily disturbed.

I know that Secret isnt his strongest work, but it did something horror books rarely do a good job of – it actually scared me.

There is a reason that Rats isn’t on that list – I havent read it. Yet. But from what I hear, it probably will end up in that list.

Oh, and Once is a bajillion times better than The Magic Cottage.

Taking my first tentative steps into the blogging world...
View all posts by woohooitsdave

My other nonsense drivel…